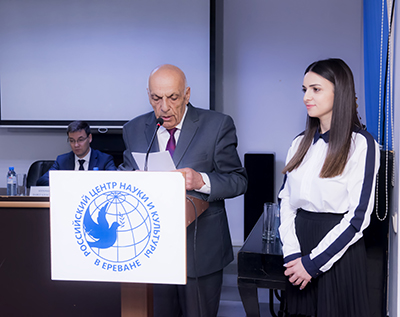 On March 21, 2019, a roundtable was held in the Russian Center for Science and Culture dedicated to the issues of clarification and understanding of the role of science in the upbringing of modern youth.

The roundtable was attended by representatives of Russian universities in Armenia, Armenian State Pedagogical University named after Kh. Abovyan, students and professors from the International Scientific-Educational Center of NAS of  the RA.

The opening speech of the event was delivered by the advisor of the Embassy of the Russian Federation in the Republic of Armenia P. A. Kurchkin,  the Head of the Russian Center for Science and Culture in Yerevan A. Ribinsky, the Head of the Chair of Sociology and Social Work at the Armenian State Pedagogical University after Abovyan, Doctor of Sociological Sciences, Professor Armen Sahakyan.

Ernest Gulanyan, a 4th year student of the management of Northern university , former military serviceman of the Armenian Army, during the exchange of ideas spoke about the issues of patriotic and international upbringing of contemporary youth.